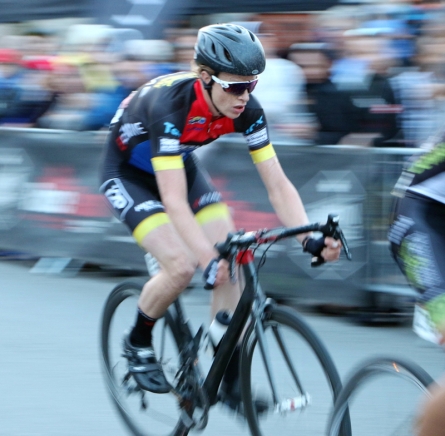 Just years after abandoning his bike for skis, Timothy Austen finds himself back on the road climbing up the ranks of Canadian cycling.

At age 17, after a suffering a concussion on his bike, the Ottawa native turned to cross-country skiing as a means to fill the void created by a discouraging last bike season.

But Austen says he began training and competing purely for success on skis, rather than his own self-satisfaction and pleasure, and decided once again to change his course. This time, he stored away his skis and hopped back on the bike.

Two years after resurrecting his cycling career, Austen earned his place on Team Ontario for this year’s Canada Games in Winnipeg.

“I’m really happy,” says the member of the local Ride With Rendall club. “I’m lucky to have the support of my team that got me to the right races to get picked for selection.”

It was team support that led him to a good ride in the Grand Prix Cycliste de Saguenay in June, signals Austen, who recently enjoyed racing in June’s Global Relay Canadian Road Championships in Ottawa.

“It was really great. I love racing at home,” underlines the 21-year-old Carleton University philosophy student. “A lot of friends and family that usually wouldn’t come watch me race got to see me. It’s pretty special.”

Austen is looking forward to racing in the criterium event right in front of the Manitoba Legislature, and simply participating in his first multi-sport event.

“I don’t think it’ll be as good as racing in Ottawa because that’s is pretty special,” the Glebe Collegiate Institute grad maintains. “But, I think it’ll come pretty close.”

Racing at home was an even bigger treat for Austen’s fellow Team Ontario member Katherine Maine. She’d missed the 2016 edition of the nationals due to a concussion from a race shortly before the Championships in Ottawa. Riding past familiar faces and places was a career highlight for the Rally Cycling rider.

“I had friends and family all over the course and hearing them yell my name was super awesome,” smiles the 19-year-old Lisgar Collegiate Institute grad. “It gave me extra energy.”

Maine began mountain biking 8 years ago and quickly made a name for herself in cyclocross, then on the track and the road, earning a spot on Team Canada for the 2015 Junior World Championships in both disciplines.

The Ottawa Bicycle Club-brewed athlete further solidified her status as one of Canada’s best up-and-coming riders with national U23 bronze and silver medals in the road race and individual time trial at this year’s nationals.

Maine will look to keep up her momentum heading into the highly-anticipated Canada Games.

“It’s been a goal of mine throughout the season and I’m just super excited,” she highlights.

Fellow OBC product Ariane Bonhomme, who placed 1st among U23 women in the criterium at nationals, will represent Team Quebec at the Canada Games.

“It’s always fun to get to represent your province,” notes the Gatineau native and Cyclery 4iiii rider. “I’ve only heard good things about Canada Games, so I’m really excited to be a part of that.”