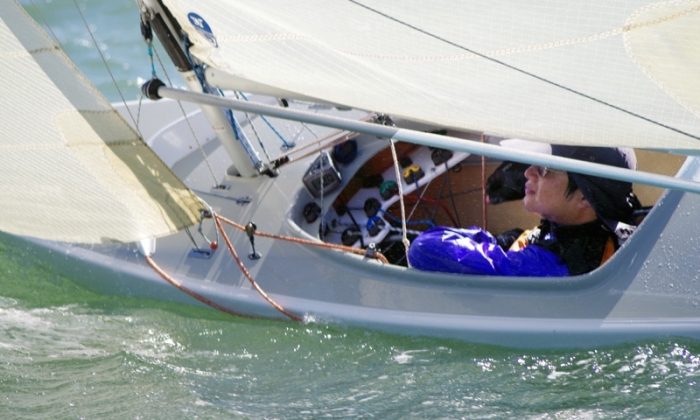 Gone with the wind are Paralympic Games sailing hopes for Aaron Wong-Sing, but in with the tide are aspirations of growing the sport he loves.

The 41-year-old soon-to-be Canada Games veteran is focused on providing other athletes with opportunities they might not otherwise have in the sport.

Wong-Sing has been sailing every summer since coming to Ottawa in 2005 from Vancouver, where he sailed leisurely but didn’t have time to take up lessons.
At first, it was a challenge to learn the workings of the sport, but he says did eventually pick it up fairly quickly.

As an athlete with cerebral palsy, it took lots of practice to coordinate all the maneuvers while also focusing on strategy.

When Wong-Sing moved from the Martin 16 boat to the 2.4 mR boat – a much more physical class – he began a fitness program with a personal trainer to increase his strength and stamina. Quickly, he became a top 2.4 mR sailor.

Eight years after starting lessons, the Nepean Sailing Club athlete was selected to represent Ontario at the Sherbrooke 2013 Canada Summer Games.
With a bronze medal from the event, he says his first Games provided a memory he won’t soon forget.

“My 2013 experience was really about enjoying the diverse range of athletes from all the different sports,” signals Wong-Sing, who is targeting a repeat trip to the podium this year, though he says it’s no guarantee since, despite the small number of athletes in the sport, all are very talented.

“I’m preparing for the games and hoping for a good result,” adds the Queen’s University grad. “I think it’s an incredible opportunity to sail and represent Ontario.”

The full-time federal government employee says it can be a challenge to balance his work with Public Services and Procurement Canada alongside training and travel for competitions, but he doesn’t let it get in the way of doing what he loves.

With sailing removed from the 2020 Paralympic programme, Wong-Sing understands it’s unlikely he will ever have the opportunity to compete at Paralympic Games.

“I just want to improve in the sport and also develop the sport for future athletes,” underlines the volunteer president of the National Capital Able Sail Association, which hosts an annual regatta at NSC and fundraises for sailors who need bursaries to travel.

“Sailing is a great sport for people with disabilities because it’s a truly integrated sport,” adds Wong-Sing, highlighting the wide variety of disabilities suitable for sailing.

Wong-Sing credits those who came before him for developing the sport’s solid presence locally, along with the association’s long-standing partnership with the Nepean Sailing Club, which built an accessible dock to allow sailors with disabilities to easily come down and get into their boats.

While he plans to compete as long as he can, continuing this legacy is Wong-Sing’s ultimate goal.

“I want to encourage other people that may not be aware of sailing and introducing them to the sport,” he states. “And have the sport help them increase their physical and emotional wellbeing.”