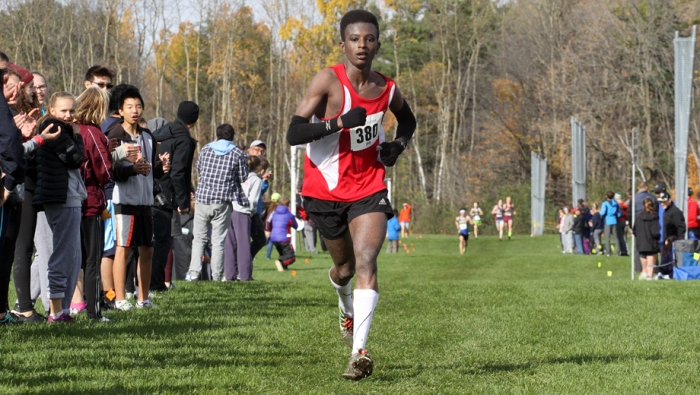 See a photo gallery of this race on SportsOttawa.com’s Facebook page.

Wagging his index finger in the air as he crossed the finish line in 1st place for the first time, Gloucester’s Andre Alie-Lamarche won the gold medal in the final race at Thursday’s National Capital Secondary School Athletic Association cross-country championships in 21:07.39, well ahead of the rest of the senior boys’ division.

Alie-Lamarche, who placed 5th amongst senior boys at last year’s city championship, said he knew the race was his to lose when he emerged from the forest of the raceway – about the 3/4 mark of the just over 6km race.

“There were a few guys, including Lucas (Zanetti) who got 2nd, who have a really good kick so I was a little nervous at that point about his kick, but I just stayed until about the last 100 m when I was kind of tired, but I think everyone was then,” Alie-Lamarche said of the end of the race, being sure to thank his coaches and teammates.

It’s his first city championship in cross-country. He said he’s aiming for a top 10 finish at OFSAA.

“That might be a bit of a stretch, but go big or go home I guess,” Alie-Lamarche added between breaths after the race. He’s yet to make up his mind of what he’ll be doing next season, but he says he hopes to run cross-country at the Canadian university level.

Sir Robert Borden’s Zanetti found himself in 6th place with about 800 m to go. Using a powerful final kick, Zanetti pushed himself ahead of the other runners and finished in 2nd place in 21:24.93.

“I’m just happy that I got a medal,” Zanetti said with a laugh. “Everyone raced really hard today.”

West Carleton’s Tommy Steele won the bronze medal with a time of 21:32.21, just a half second ahead of 4th place Nico Pedersen of Merivale.