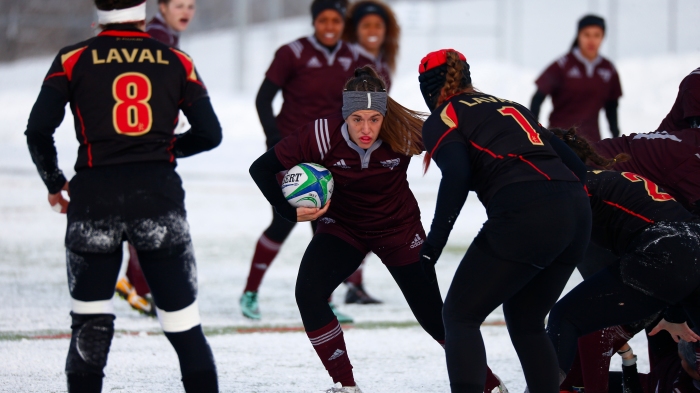 Emma Sandstrom carries the ball for the Gee-Gees in the U Sports women’s rugby championship. Photo: Ron Leblanc.

The University of Ottawa Gee-Gees rugby team made history on Nov. 5, becoming the first RSEQ team to win a national championship, taking home the U Sports gold medal for the first time in the program’s 20-year history.

“There’s just a lot of emotions,” head coach Jennifer Boyd said. “We’ve been really close the last few years and to finally do it there’s a sense of relief for sure and a major sense of accomplishment – just all kinds of emotions, it’s so hard to describe it.”

The Gee-Gees squared off with the Laval Rouge et Or, who they had beat 25-7 at the RSEQ finals just nine days before, in the U Sports rugby finale in Lethbridge, Alb. In an intense back-and-fourth battle in the snow, the University of Ottawa was able to come out on top again in a 20-10 victory.

“Hats off to Laval because we really gave it to them in the RSEQ final, but they played really well on Sunday,” Boyd, the reigning Ottawa Sports Awards Female Coach of the Year, added. “They came into the game with no pressure – they had nothing to lose, whereas we had everything to lose. You know, it’s hard to beat a team two times in a row, so the odds definitely weren’t in out favour, but we did it – our defence was just relentless and there was a tremendous effort from the girls out there.”

A tremendous effort is right, as the road to getting to this point wasn’t easy. In fact, Boyd thought their journey would come to an end in the semi-finals against the University of Calgary.

“I really thought it was over and I told the girls that. It was 15-3 for Calgary with 12 minutes left in the game and they hadn’t made a mistake yet… I just thought we can’t win, it’s 15-3, they’ve got this phenomenal team and in my head, I just knew that was going to be the final – I thought Calgary was going to be the team to go on and win,” Boyd explained.

“But then we did what I like to call the ‘the greatest comeback in sports history’. The girls did a sequence of plays that lasted three minutes and 40 seconds with 23 tackles.

Typically, in rugby a passage of play lasts 43 seconds – that is the norm, that is the average. And in freezing cold temperatures, we did a passage of play that lasted over three minutes and all of a sudden we score and its 15-10 and then I was like ‘Wait a minute’ and we went on to score 29 unanswered points.”

Ottawa was able to beat Calgary 32-15 in a double overtime thriller to move onto the championship round.

“I couldn’t believe it,” Boyd said. “Even the referee – who’s actually from Ottawa – said ‘I cannot believe that just happened’, she was just in shock. Honestly, it was unbelievable, but the girls really believed in themselves. It sounds cliché, but they really did – you couldn’t write a better story.”

After such an incredible comeback in the semi-finals, Boyd wasn’t ready to settle for anything less than a win.

“We wanted the gold medal, we wanted to win the final,” she explained. “We wouldn’t have been happy with a silver – I would rather a bronze than a silver any day because you don’t want to end your season with a loss after a season like we had.”

But, a loss wasn’t in the cards for the Gee Gees this time around. After coming so close in past years and winning an RSEQ championship in 2014, they were bound to be victorious.

“We always talked about being the best – not necessarily best by score, but best overall,” Boyd went on. “But to be recognized by winning the trophy, to finally say we are champions and to be crowned with the gold medal and what that symbolizes and for everyone to say ‘Congratulations, you deserve it’ I think there was a sense of relief there – especially for the girls who can’t come back, who did their five years.”

One of the girls on that list is soon to be graduate, Ottawa-native Emma Sandstrom.

Like Boyd, she also described the win as a relief.

“The only emotion I can come up with is relief,” she said. “I just remember crying, it didn’t really sink in that we had won, but it was overall just a sense of relief. We finally got the win on our last opportunity to get it.”

Though, the West-Carleton Secondary School graduate explained that she approached this season with a do-or-die mentality.

“I just knew we had to give it everything. There was a core group of us and it’s our last year and we’ve been through the ups and downs of the past five years together and I remember we talked about it at the beginning of the season and we were like ‘There’s no other option – it’s now or never’. We really didn’t think of any other outcomes.”

One of the fifth-years involved in that discussion was Sandstrom’s teammate, and fellow Ottawa-native, Breanna Phillips, who described the win as “perfect”.

“In the moment when we won, it just felt really right,” Phillips said. “It felt like the perfect moment, perfect time and it just finally happened. It was exciting, but it was very emotional. I remember looking around the field and we all just knew that we finally did it.”

After finishing on such a high, Ottawa rugby is hoping to translate their success in upcoming years. With 29 returning players on her roster for 2018, Boyd is excited about what the future holds.

“We want to be champions every single year – both on and off the field,” she said. “This year was great and I really enjoyed it, but I can’t live on that forever. There’s got to be more, we have to keep moving forward, so it’s already back to work for me.”