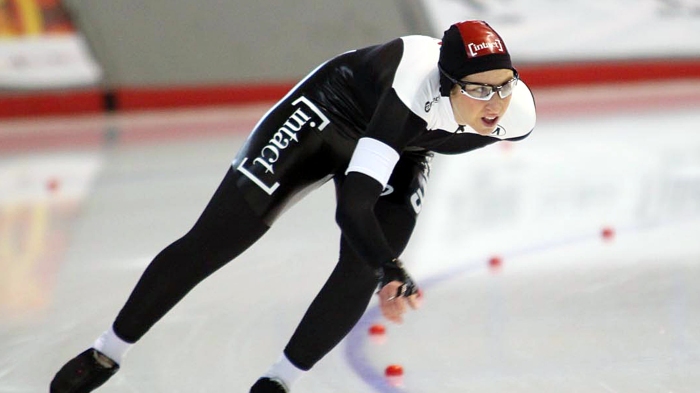 Alongside the Ottawa Curling Club quartet, there are several other local curlers in the mix at the Roar, including a pair of past Olympic champs who grew up in Ottawa.
Vancouver 2010 gold medallist John Morris will skip a Vernon Curling Club rink, while Sochi 2014 champion Dawn McEwen is the lead for Team Jennifer Jones.

Mat Camm, who curled out of Navan for much of his career, is the third for John Epping’s Toronto team.

There are a number of local athletes in other sports on the cusp of making it to the 2018 Winter Olympic Games, which could push the Ottawa representation past a dozen in PyeongChang.

Leading the way are three products of the Gloucester Concordes Speed Skating Club. Ivanie Blondin, Vincent De Haitre and Isabelle Weidemann have each already been on the podium just 2 races into their World Cup season following November events in Heerenveen, Netherlands and Stavanger, Norway.

Blondin won 4 medals from 4 different events. The most valuable one was her 5,000-metre silver – that gave her the standard required to make the Canadian Olympic squad (though she hasn’t yet been officially named to the team).

“I had a surge of emotion overcome me and I started to cry,” Blondin said in a Speed Skating Canada media release about the moment she realized she’d pre-qualified for the Olympics. “It’s such a great feeling.”

Blondin also collected a bronze in a 3,000 m race and laid down a blistering finish to claim silver in her signature mass start discipline.

“My result shows that I’ll be solid again in the mass start this season, and that I’ll be up to the task looking ahead to the Olympics,” signalled the 27-year-old leader of the Canadian speed skating team who’s been ranked amongst the world’s top-4 in mass start for the past 5 seasons.

Blondin is bolstered for the first time by a Canadian teammate in the strategic mass start event. A cousin to her former Concordes coach’s daughters, Keri Morrison – who trained with Gloucester at times – has mirrored Blondin’s transition from short-track to long-track speed skating.

“It is really motivating and big boost of confidence to start the season with a World Cup podium,” said De Haître, last season’s World Championships silver medallist and World Cup #2-ranked overall racer in the 1,000 m, via SSC.

The 23-year-old fell down the results sheet in his individual races while battling illness at the second World Cup, but then managed to anchor the Canadian men’s crew to a new world record in the team sprint (a non-Olympic event).

“My throat’s sore, but other than that, the world record feels good,” cracked De Haitre. “I had a couple of bad races, so my confidence wasn’t great, but I knew that as a team, we would do well together and that we would pull this off.”

Weidemann, too, has a serious chance to hit the Olympic podium with Canada’s rejuvenated women’s team pursuit squad (of which Blondin is also a member) – bronze-medallists at the Heerenveen World Cup. The 22-year-old also served notice that she’ll take a shot at making it to the podium on her own thanks to her 4th-place performance in the women’s 5,000 m at the Stavanger World Cup, where she finished within 1 second of bronze medallist Martina Sáblíková – the 2014 Olympic champion in the distance.

“This is my best finish ever, so it’s exciting,” Weidemann said via SSC. “But at the same time it’s bittersweet, because it’s close to the podium and yet, not quite good enough. It means things are going in the right direction, but there’s still a lot to work on.”

The trio will compete on home ice for the Dec. 1-3 World Cup in Calgary.

Dustin Cook is as sure a bet as there is to compete in South Korea. The 28-year-old alpine skier is safely ranked inside the world’s top-30 in his signature super-g discipline.

In his return from a knee injury that wiped out his 2015-2016 season, the Nepean High School grad didn’t quite match the heights that saw him win a 2015 World Championships silver medal in 2016-2017, though Cook kicked off his current campaign with an encouraging 11th-place performance at the Nov. 26 World Cup in Lake Louise, Alta.

Fully expect to see Team Canada goalie Geneviève Lacasse in Korea. The 28-year-old was a backup for the 2014 Olympic champion team and is currently centralized in Calgary with the Canadian women’s team preparing for the Games.

Lacasse was in the crease from start-to-finish for Canada in an Oct. 25 exhibition match in Boston, turning aside 37 of 38 shots to lift the Canadians past USA 5-1, though the U.S. turned the tables with a 5-1 win of their own in the Four Nations Cup final on Nov. 12 in Tampa.

Lacasse, who lives in Limoges and trains in Ottawa during her hockey off-season, shutout Sweden and Finland earlier in the Four Nations competition.

On the podium at the last 3 national championships, Alaine Chartrand remains well-positioned to claim 1 of 3 available Canadian women’s singles figure skating Olympic berths, though the 21-year-old Nepean Skating Club product has struggled of late to hit the kind of scores she earned in the 2016 season when she was Canadian champ.

Chartrand injured her ankle just days before the 2017 Canadian Tire National Skating Championships in Ottawa, but managed to win a bronze medal nonetheless. At her most recent international competition in Japan for the NHK Trophy Grand Prix event from Nov. 10-12, Chartrand scored 159.36 points to place 11th of 12, matching her result from October’s Skate Canada International Grand Prix.

Mimi Rahneva and Seyi Smith are tearing up the bobsleigh/skeleton tracks and will be podium contenders in PyeongChang.

Near misses for Ottawa international athletes

A trio of Ottawa-bred athletes missed earning Olympic berths for foreign countries.
Sisters Hannah and Samantha Morrison fell short of qualifying to represent Great Britain in short-track speed skating at PyeongChang 2018. The Gloucester Concordes products whose father was born in the UK had their best chance at reaching the Games in the women’s 3,000-metre relay, but missed 1 of the 8 available berths, their team ranked 14th after the World Cup events that counted towards qualification.

An Ontario Bantam champion with Team Homan back in 2006, Jamie Sinclair could not have come any closer to claiming an Olympic curling berth for Team USA. The Anchorage, Alaska-born, Manotick-raised and St. Paul, Minnesota-based skip faced off against Nina Roth in a best-of-3 showdown to determine which team would represent the U.S. in PyeongChang from Nov. 11-18 in Omaha, Nebraska. The rivals split the first 2 matches, which both went to extra ends, before 25-year-old Sinclair dropped the deciding contest 7-6.