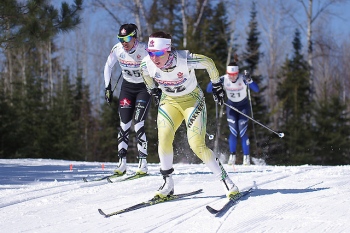 For a ninth consecutive year, the Nakkertok cross-country ski team captured the 2018 Ski Nationals aggregate club championship banner, a streak that now gives the club the record for most consecutive and total championship wins.

Stewart-Jones reached the podium in each of her five events at the Mar. 11-17 championships in Thunder Bay, Ont. In her final race of the week, the 22-year-old triumphed to her first ever senior race victory in the classic mass start.

These championships were a form of redemption for the Chelsea, Que. native. She had hopes of qualifying for the Olympics earlier this season but just missed out, in part due to a concussion suffered in September.

“I was pretty devastated and frustrated because I felt things had not gone the way I’d wanted them to and I just wasn’t in the shape I needed to be at that time of year,” she reflects. “I was definitely excited to come back to nationals and definitely got a bit of redemption.”

Stewart-Jones was one of 42 athletes that carried the Cantley, Que.-based club to a championship banner in Thunder Bay.

Nakkertok’s nine straight club championships are an unprecedented achievement, breaking a tie with Foothills Nordic for most titles. The club’s head coach Kieran Jones, who’s in his fifth season in the role, says the club’s success is built on contributions from all its race team members.

“The club is definitely good because of the extreme contributions of the volunteers that we have,” he notes. “We have some amazing skiers but they’re strong because we have great volunteer coaches.”

To continue this success, he says the club will have to keep its focus on developing its young athletes and growing its older athletes that are looking to reach the highest levels of the sport.

“One of our strengths is we don’t tend to focus on one or two individuals who are strong or one or two age groups that are strong,” he explains. “We have really quality coaching from our youngest athletes all the way to our oldest athletes.”

On top of U-23 and senior women’s individual aggregate championships, Nakkertok had a few other top-three finishes.

Pierre Grall-Johnson finished 3rd in the 1999 junior men’s category and finished 1st for his age group in the long sprints. At the university level, Carleton University’s Aidan Kirkham finished 2nd for the men and teammate Zoë Williams tallied 3rd for the women.