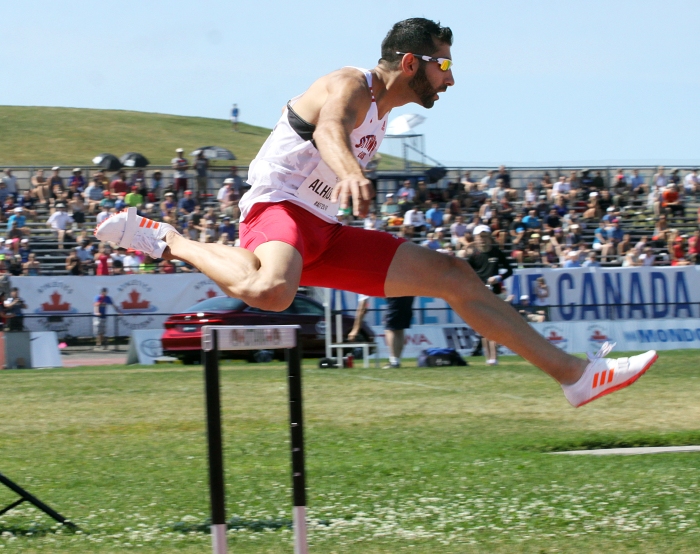 The 2018 Canadian Track and Field Championships came to a close on Sunday afternoon, but not before two local athletes could add national silver medals to their track records.

Saj Alhaddad had no problem navigating the course in the men’s 400 m hurdles. The silver medal he earned in a time of 51.50 seconds came with bonus feelings of redemption: Alhaddad tumbled out of this same event at last year’s nationals.

“This time last year I crashed hard on the hurdles,” said Alhaddad, who added that he’s trained hard to prepare himself for a better result this time around. “I’m thankful to have been part of the final and to (win) a hard medal with hard work.”

The Syrian-born athlete made a move around the 200 m mark to take a lead heading around the final corner but Etobicoke’s Malik Metivier surpassed him with a strong finish after the final hurdle.

For Alhaddad, there were no hard feelings losing to the 19-year old phenom who now runs for Duke University in the NCAA with the likes of Rai Benjamin, one of the biggest young stars in the sport.

“Malik is a great finisher. He’s the future of this event at such a young age.”

Already making plans for personal improvement, Alhaddad says he and his coach will work on going from 14 steps between hurdles down to 13 over the next year.

Eliezer Adjibi hustles down the straight in the under-20 men’s 200 m at the 2018 Canadian Track and Field Championships. (Photo: Dan Plouffe)

Also lighting up the track was Eliezer Adjibi, who took the silver medal in the under-20 men’s 200 m. Adjibi has been setting personal bests all season, and he did so again in the Saturday prelims with a time of 21.70. He went on to match that time in Sunday’s finals.

“I came to nationals with no expectations, and I came out with a silver and a bronze, so I’m still happy with that,” Adjibi said.

Adjibi is brand new to the track and field scene, this being his first year of sprinting after switching from soccer.

“I was always pretty fast for soccer, so I decided to try track in Grade 11 for fun.”

For Adjibi, the silver medal made up for the let-down he felt following his third-place finish in the 100 m final.

“I was disappointed to lose the 100, but there’s nothing I can do about it now,” said the Louis-Riel High School graduate. “I’ll just have to win it next year.”

Barbara Bitchoka clears the bar during the high jump of the 2018 Canadian Track and Field Championships. (Photo: Dan Plouffe)

Women’s high jumper Barbara Bitchoka missed the senior podium by the thinnest of margins, completing a 1.75 metre jump that tied for the second highest measure in the finals. The CANI Athletics leaper cleared the same bar as competitors T-Noocile Jean and Dallyssa Huggins but fell beneath them in the standings with the tie breaker because she’d had more failed jumps in the earlier rounds.

The 3rd place spot on the podium was vacant, with Jean and Huggins tying for silver.

Bitchoka’s result was notable considering she only started training for this year’s event in April. Her coach, Lotfi Khaida, remarked on her fitness and natural ability as an athlete, adding that all she needs is some fine tuning to become a top performer.

“I don’t think any other jumper on the scene today had anything better than her except for technique and positioning, which is very important to go higher in high jump,” Khaida said.

Also narrowly missing the podium was Lions runner Sebastian Saville, who finished 4th in the men’s 800 m final with a time of 1:50:92.

“I had a goal coming into the season to be top four at nationals,” Saville said between deep breaths at the finish line. Saville improved on his 8th place finish in last year’s event.

Saville is one of many Ottawa Lions who will go on the club’s European tour later this week and was happy to be leaving on a strong note.

“Only onwards and upwards from here.”