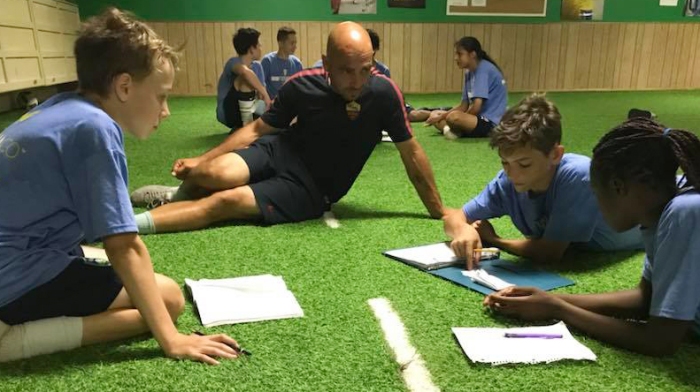 School may be out, but learning continues throughout the summer at Futuro Soccer Academy. Part of our club’s 4-week Summer Training Camp are classroom sessions led by visiting coaches from top European professional youth academies.

Included in their year-round program, Futuro players make full use of their extra summertime hours to maximize their soccer development. Over a 4-week Summer Training Camp period in July and early August, Futuro members receive 140 hours of training.

That includes technical and tactical sessions, player game analysis, a leadership program, the classroom presentations, and of course the opportunity to be scouted by professional academy coaches for trials in Europe.

Celina breezed through the Ottawa trials, followed by an outstanding performance in Toronto to solidify her selection. She was one of just 12 players chosen to Team Ontario, which went on to beat Quebec and book its spot as Team Canada for the World Finals in Spain.

Celina follows in the footsteps of previous Futuro players Ben Penticost (2005) and Claire Rea (2004) who have both played for Canada at the world finals in 2017 and 2016.
The Danone Nations Cup is the world’s biggest football tournament for kids aged 10-12. Each year, 2 million children participate in the Danone event globally.

St. Anthony Soccer Club Under 5-8 Development League Program has been a great success this summer on Thursday evenings. From the inception of the program last summer, we have grown our numbers by 30%. Every session has a 1-6 player to coach ratio, with heavy emphasis on physical literacy skills to develop movement competence in our little children, which in turn will create great, confident players in the future.

Congrats to our beloved Men’s Premier team for winning their first 3 rounds of Ontario Cup play.

The boys travelled down to Oakville for their first round match after a great week of prep work on the training ground and came away with a 4-1 victory.

Boosted by lots of local support from our club’s youth teams and the Italian community, they downed Windsor Ciociaro Premier 3-2 back in town on June 28.

Panathinaikos Toronto was next to fall to the mighty Italia, 2-1 on July 8. The boys are now into the quarter-final round, where we’ll face the Kitchener Polish Eagleson Aug. 12.

St. Anthony’s Men’s Premier team has a storied past, including a national championship in 2006.