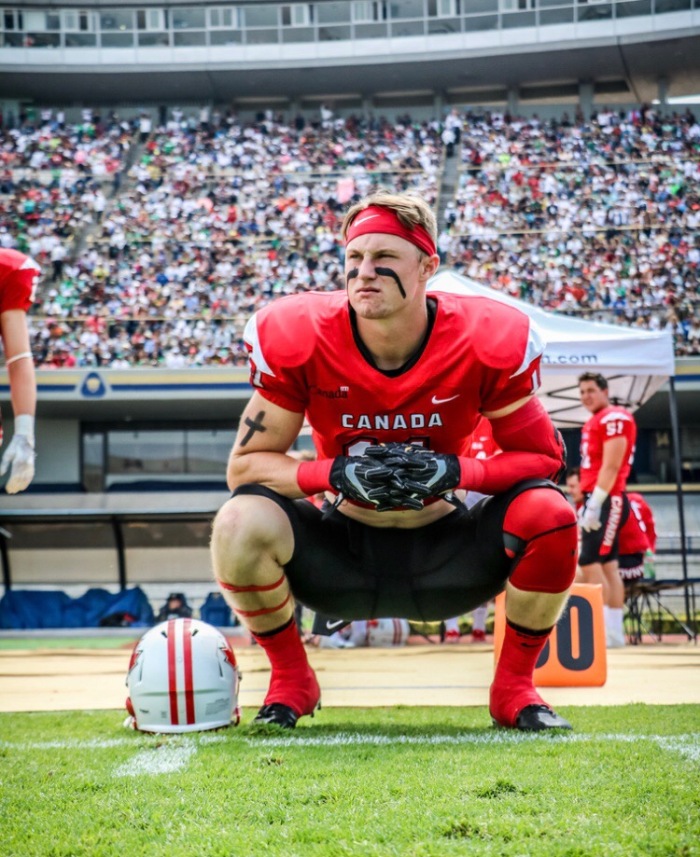 When Lake Korte-Moore descended into Mexico City for the 2018 IFAF World Junior Championships, he didn’t expect to be treated like a celebrity.

“People would come up wanting to take pictures and get autographs,” recalled the 18-year-old who prepared himself for moments like this at St. Joseph High School’s Football North program last year.

Canada’s Under-19 gridiron squad won a 13-7 defensive battle against Mexico in the tournament’s finals, making Canada the first country to win back-to-back championships.

The gold-medal game was as big a stage as Korte-Moore has played on to date. Not only was it his first time competing internationally, outside of two single-game bowls against the U.S., but it was also fought in front of a crowd of 30,000 people.

The 6-foot-3 defensive end said the noise in the stadium was daunting, but also made for a lot of excitement. 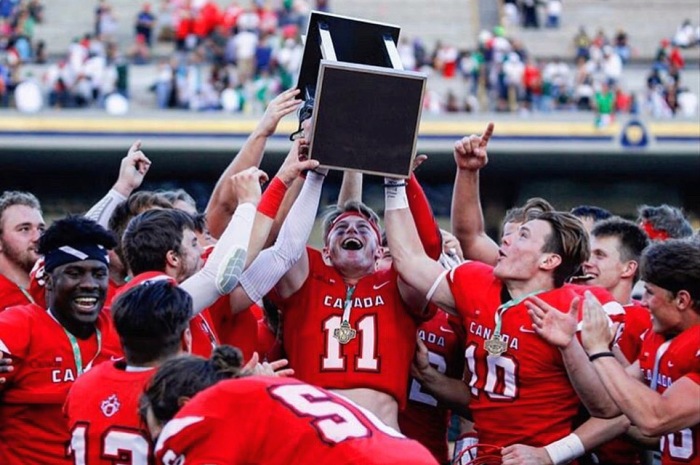 Canada has now won three of the five bi-annual world juniors. The U.S. was displaced from the final for the first time in the tournament’s short history after losing in the semis to Mexico, which made its first appearance in a final.

With higher levels awaiting him, Korte-Moore said he’s grateful for the big-game experience he gained last year as captain of St. Joe’s Football North, an out-of-conference team that plays some of the top high schools in the U.S.

Following the world juniors, Football North head coach Blaine Scatcherd looked back on his former captain’s time at St. Joe’s and lauded his attributes both on and off the field.

“Lake was a leader for us on the field. He plays with a tonne of heart and a tonne of energy and intensity. He made plays for us all last year,” the former Ottawa Gee-Gees coach underlined.

“He also played a big part in the school and was a guy who was not just a Football North player, but also bought into being a member of the St. Josephs community.

Last year was the very first Football North season at St. Joe’s as the program originated at Clarkson Secondary in Mississauga the year before. Though the program’s doors are open to high-schoolers from around the country, it’s comprised mostly of players from Ottawa.

The year-round program is more than a football team; it also includes classroom instruction to guide players academically, as well strength, conditioning and speed training four days per week.

Starting Aug. 17, the team will embark on a 10-game schedule that includes a head-to-head against St. Joe’s sister school, Clarkson, and nine games against highly ranked U.S. high schools.

Last season’s schedule included a game against St. Francis Academy in Baltimore, which ranked 4th out of the more than 20,000 high school football teams in the States.

The parallel objective of Football North is to provide scouting exposure for its players, but Scatcherd stresses that he’s not out to push Canadian football talent south of the border.

“We love kids who are interested in going to the States and have the opportunity to go to the States, but we are also very happy to send our kids to Canadian Universities.”

That message was reflected in Korte-Moore’s decision to start his varsity career with the University of British Columbia Thunderbirds in September. Scatcherd says he’s confident he’ll have an immediate impact.

“I know he’s going to have a very successful post-secondary career.”