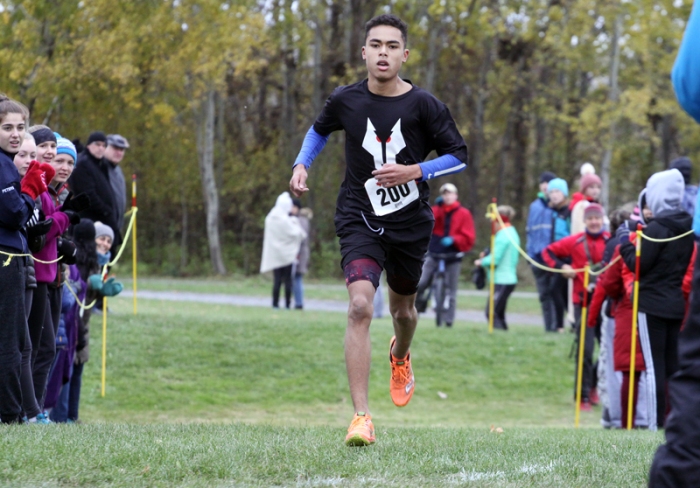 See SportsOttawa.com’s Facebook page for a full album of photos from this race.

Yannick Meredith won the midget boys race of the city high school cross-country championships by a monstrous 26 second margin, which was enough to impress his older brother, and senior boys runner, Zachary Meredith.

“I’m proud,” the older Meredith said with a laugh. He didn’t accept his younger brother’s idea that he might be able to beat him in a race.

As for Thursday’s race, the younger of the De La Salle runners said he didn’t expect to win by such a large margin.

“I thought there would be some people who were close but I figured I would do pretty well,” he said.

He ran the race in shorts – a style choice that many avoided on a cloudy, below-freezing day. He thinks it ultimately helped his time.

“My coach told me not to wear tight pants, so it doesn’t cut my stride,” Meredith said.

The older Meredith finished 6th in the senior boys competition, which was good enough to lock up a spot at the OFSAA championships.

South Carleton’s team also qualified for the OFSAA championships. They came in 2nd with a score of 61, which was provided by Jorian Donovan (2), Russell Niedre (4), Liam Jessiman (17) and Ryan Darby (37). Hayden Covey qualified as the team’s 5th runner by placing 44th.

Find more coverage of the 2018 NCSSAA XC Championships via: https://sportsottawa.com/2018/10/26/glebe-gryphons-win-all-six-division-titles-at-the-city-high-school-cross-country-championships/