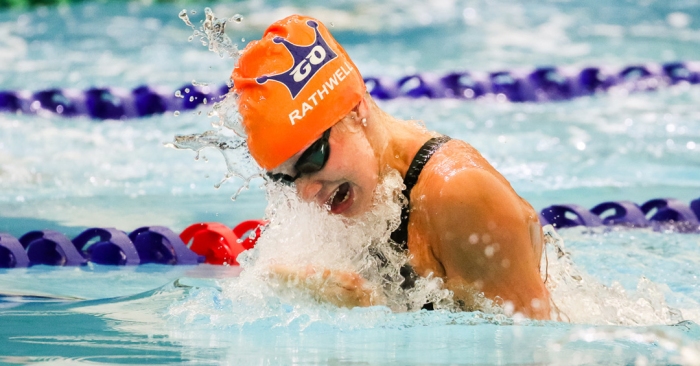 There’s not much for a competitive swimmer to think about once they’re standing on the pool deck with their hours and days and weeks of training behind them. There’s no strategy or game planning at play in the moment; the sole imperative is to get in the zone. And so with headphones on, flowing pump-up music into her ears, Regan Rathwell prepared to dive into a pool next to girls as many as five years her senior.

Rathwell’s age didn’t matter when she touched the wall in medal position. The 15-year-old Ottawa native snagged silver in the 100 metre backstroke at the 2019 Canadian Swimming Championships and added bronze medals in the 50 m and 200 m backstrokes to boot.

But as it turns out, age does matter when it comes to tracking a swimmer’s Olympic chances, and with the Greater Ottawa (GO) Kingfish athlete being on the right side of 16 while earning medals against 20-year-olds, Rathwell’s establishing herself as a hopeful for future international success.

The competition was thinner at this year’s senior national championships with the top Canadian swimmers down in Lima for the Pan Am Games, but Rathwell still had a banner showing. Her 50 m event at the championships on Aug. 10 saw her reach a new personal best with a time of 29.34 seconds.

The backstroke has proven to be Rathwell’s best style at this early stage in her swimming career, but she’s also determined not to be a one-trick pony.

“I try to focus equally on all the strokes, and my IM (individual medley) is pretty strong,” she said in an interview with the Sportspage. “My freestyle was pretty weak at the beginning of the season, so was my butterfly. But I’ve been working really hard on those.”

Her efforts to become an all-rounder have been paying off, according to Swimming Canada’s Iain McDonald.

“She’s obviously showing good skill development across a number of strokes which speaks well to the foundation that her and her coaches have been working on in her club program,” he said.

McDonald is the senior manager of NextGen, Swimming Canada’s high performance program. He helps explain “On Track Times,” an evaluation system that looks at the career progressions of world-class athletes to determine where up-and-comers likely need to be based on average rates of improvement by age, event and gender. There are three different tracks derived from this formula, with Track 1 essentially being ahead of the curve.

Rathwell has set Track 1 times in the 100 m and 200 m backstroke as well as the 200 m individual medley – a more important indicator than, say, the five medals she won at this year’s Canadian Junior Championships in swimming in July.

“That’s really what we look at more so than necessarily winning a medal at senior or junior championships,” said McDonald.

You wouldn’t know it, but swimming is a lot like baseball – at least according to McDonald.

“You look at what the Blue Jays do with their projections and trying to gather a bunch of young athletes.

“A bunch of them are showing they have good potential, but you have to wait to see who gets to the other side.”

Being on Track 1 is as good an indicator as Rathwell – or anyone – could hope for at this stage. But Moneyball is rooted in statistics, and in swimming only the outliers reach the highest level.

“She still has a long road ahead of her to make sure she gets there,” McDonald added.

That said, with Rathwell just now entering the On Track system, she’ll be in line for funding and coaching resources to help her on her way. It’ll take dedication, but she hasn’t been short on that to date.

From gym to pool

Rathwell’s dedication to athletics didn’t start out in the water; it started in the air.

“I thought I was going to be a gymnast,” she said, recalling earlier years spent learning how to manoeuvre on bars and balance beams.

Even then she was always in the water, swimming in her backyard pool as far back as she can remember.

“We’d take swimming lessons and one of my instructors told me that I could be a great swimmer and that I should try out for the swim team, so he got me a tryout.”

With all her current swimming training, does she ever miss gymnastics? “Not at all,” she says.

“My younger sister’s a gymnast and she’s competing really well, so I’m not too far from it. I always get to see what’s going on.

“I’m happy with my choice.”