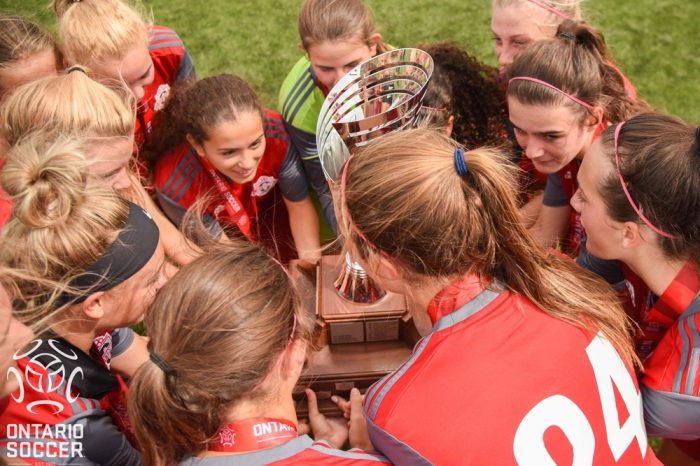 From forging a partnership with a leading Major League Soccer franchise, to earning recognition as one of Canada’s top youth clubs, and capturing its fair share of hardware, it’s certainly been a whirlwind first season for Ottawa TFC Soccer Club.

“It’s been a year that feels longer than a year,” smiles OTFC General Manager Pavel Cancura. “Thinking back, Cumberland and Capital United getting together and becoming Ottawa TFC seems like it was 5 years ago, but no, that was this season. It’s nice to look at how far the club has come.”

It’s been a season that featured many major milestones, including numerous victories off the field. Establishing the partnership with Toronto FC was one big one, and another came when OTFC was selected amongst 39 clubs from across the country to receive Canada Soccer’s first set of national youth licences – granted only to organizations that meet the highest standards for governance, administration, infrastructure, and technical instruction.

“It’s taken a lot of work, that’s for sure,” notes Cancura, who led Cumberland United for a decade before OTFC’s birth. “We are slowly getting to be on the provincial and national map as a club, so all the work is worth it. It’s been remarkable how everyone bands together for a greater cause.”

It didn’t take long for the new club to become champions. OTFC’s biggest triumph came from its under-17 girls’ team, which won the Ontario Cup and will chase a Canadian crown at the Toyota National Championships starting Oct. 9 in PEI.

“They had a great run,” Cancura says of the team’s 6-victory performance in Ontario Cup play. “It’s a pretty special team I think, and we’re looking forward to seeing how they do at nationals.”

Coming up right behind the U17 squad is a U15 girls’ team that won the 2019 East Region Cup. OTFC’s women’s premiere team celebrated an Ottawa Cup victory, while the C-1 women won the second-highest tier league, and a young men’s premiere side also placed well.

The newcomers to the Ontario Player Development League showed no signs of being rookies as OTFC’s U14 girls and boys posted a combined record above .500 in league play.
And the club revelled in watching one of its alumni rise onto the Canadian women’s national team.

“It’s amazing,” Cancura says of Vanessa Gilles, a former tennis player who first joined club soccer at age 15 with Cap U. “Another great motivation for our girls, and all the girls in Ottawa, to see someone come through like that.”

A total of 28 OTFC players were recently identified for provincial program screening at 3 boys’ and girls’ age groups, and many more have benefitted from training opportunities at Toronto FC’s academy.

“The opportunities available to kids are infinite really,” Cancura underlines. “You can go as far as you possibly can here. The pathway to the top echelon is crystal clear.”

But beyond trophies and player advancement, what Cancura enjoys most about OTFC is that there remains a family feel embedded within the club’s culture.

“We’re seeing players have a lot of success, but we’re still doing this in our community,” highlights Cancura, whose club of 3,000+ members is half the size of many other national youth licencees. “It’s a lot of people from the community doing a lot of hard work to make something special happen.

“I’m most proud of that – that it’s organic, and built on community values, and yet it’s excellent.

“You kind of feel like this club is the good guy in the Disney movie.”