See SportsOttawa.com’s Facebook page for a full album of photos from this race.

Skye Pellerin won a bronze medal in the senior girls’ race at the NCSSAA cross-country championships on Oct. 24, but she scored a bigger prize pedalling instead of running recently.

The Grade 12 St. Francis-Xavier Catholic High School student signed a contract to receive funding from Cycling Canada as part of the RBC Training Ground initiative to identify young Canadian athletes with the potential to become Olympians.

“I didn’t fully expect it, but I was really hoping I would get it,” says Pellerin, selected as one of 30 funding recipients nationwide between age 14-25. “I was super excited.”

From a pool of roughly 2,000 who tried out initially from coast to coast, Pellerin was amongst 100 athletes invited to the Sept. 14 Training Ground national final in Calgary.

After seeing her beep test scores, her physical stature, and her results in distance running, Cycling Canada saw potential in her on wheels.

“I think it’s a great new sport that really correlates with running,” signals Pellerin, who’d only rode a mountain bike before she was brought out for a test ride at the Milton velodrome.

“I love running, but I realized maybe my best shot for the Olympics is in something else,” adds Pellerin, noting the deep field in track-and-field, with few Olympic berths available in each event. “I love it. I would never quit track fully. If I have to commit to cycling, I will, but I’ll always run on my own time and aim to up my endurance.

“It would kind of suck to leave running if I had to, but whatever is going to get me to the Olympics.”

Newly-minted cyclist seeks to replicate the legend of Mike Woods 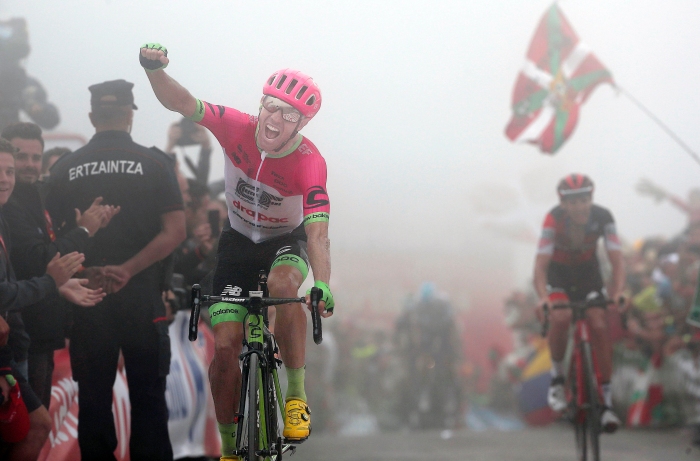 Pellerin received a lot of equipment once she started with Cycling Canada, including a recycled helmet with the name “Woods” on the back.

So she asked her Canadian coach, “by chance, is that Mike Woods?” – as in the 2018 UCI World Championships bronze medallist from Ottawa who recently completed his first Tour de France – “and he’s like, ‘Oh ya, it is!'” recounts Pellerin. “I thought that was so cool.”

“He was also a top-level runner, and now he’s one of the top in the world for cycling. I think it definitely gives me hope,” indicates Pellerin, who travelled to the Training Ground national final with former Bell city-champion hurdler Lucy Hempstead – another athlete identified by Cycling Canada.

While her athletic future is likely shifting towards cycling, Pellerin isn’t done with running just yet – the OFSAA 2017 XC junior girls’ 6th-place finisher definitely wants to finish her high school XC career with a bang.

“I have high hopes because it is my last OFSAA,” highlights Pellerin, who had a bit of a cold and eased up in the second half of her city final race. “I upped my mileage a lot this year, so I’m really hoping for a podium. Top-5 is good too, but as high as I can get is what I really want.” 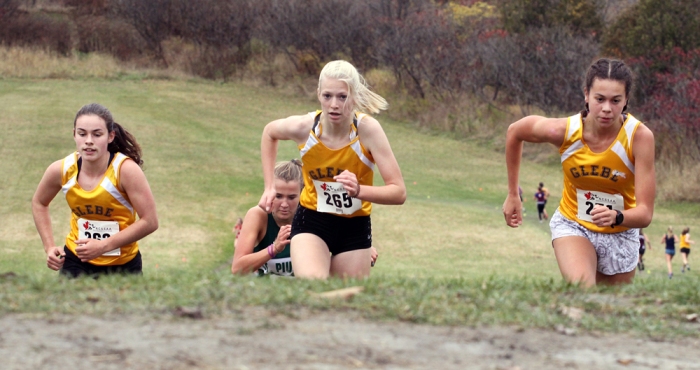 “They’ve all taken turns being our top runner at a given meet. That’s a really, really good sign,” Glebe coach Kirk Dillabaugh says of his evenly-matched front four. “They help each other out, and they truly do run as a team.

“It’s an individual sport obviously – everybody runs for themself – but it can help you, #1, to be motivated, and also sometimes when you go to these big races, you don’t know your competitors, you have no idea what’s going on, how you’re running in relation to others, but when you’ve got your teammates there, you sort of know how you should be doing in relation to them. So it’s huge.”

The Grade 11 Gryphons have known only OFSAA gold so far in their high school careers, but the challenge to repeat their 2017 midget and 2018 junior girls’ titles in the senior division will be greater.

“It’s a big step up to senior,” Dillabaugh notes. “We’ll pack pretty tight. As long as we can keep into that 30-40 range, as opposed to a little farther back, we’ve certainly got a shot at the podium.

“I think we’re stronger than last year. We don’t have someone who will give as a low single score like Rosalyn Barrett did last year (en route to senior girls’ team bronze), but we’ve got a shot. Anything can happen in a big race like that.”

Lisgar’s Emma Betty pulled away from St. Peter’s Katie Newlove just before the final corner to win the gold medal in a time of 24:46.9 for the 6.37 km course.

“It was a good race. It was what I was hoping for,” signals Betty, pleased to win her final high school XC competition in Ottawa.

“It’s fun to just get out and race,” notes the first-time city champ and 2-time runner-up, reflecting on her XC journey through high school. “There’s the joy of running, and the physical part of putting your all into something that’s really awesome.

“Our team at Lisgar is super great,” adds Betty. “They make it all the better.”

With Glebe and Lisgar’s dominant runners near the top, individual OFSAA qualifiers needed only a spot inside the top-11. Newlove, Pellerin, St. Pius’ Katya Semeniuk, Mother Teresa’s Elana Tyman, and Nepean’s Karina Gruson claimed tickets to Sudbury out of the field of 121.

Find more coverage of the 2019 NCSSAA XC Championships via: https://sportsottawa.com/2019/10/29/2019-ncssaa-xc-championships-coverage/