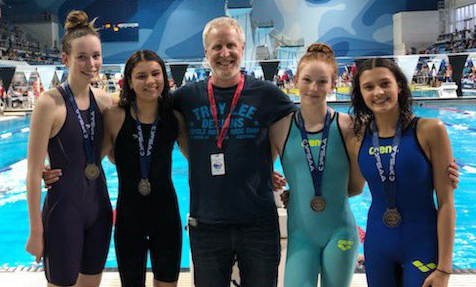 At the Mar. 3-4 high school provincials in Toronto, the Knights’ national capital record time of 2:00.75 brought them in over 1 second ahead of their nearest challengers in the 31-team open competition. Karina Gruson also earned an individual bronze medal in the open girls’ 100 m short-course individual medley.

The Nepean quartet are all members of the Swim Ottawa club and are ranked among the top athletes nationally in their age groups.

Competing a couple of days later at the club provincials, also in Toronto, Amari Delima-Baril won 3 more relay medals with Swim Ottawa – silvers for the 4×100 m and 4×50 m medleys and bronze in the 4×100 m freestyle.

The top local results from OFSAA boys’ basketball championships were antique-bronze (4th-place finishers) performances by Notre Dame (at the ‘A’ championships for the province’s schools with the smallest student populations) and Ashbury (‘AA’), while Louis-Riel was the consolation bracket champion after deciding to challenge themselves in ‘AAA’ competition despite being an ‘A’ size school, placing 9th overall against Ontario’s largest schools.

The remaining OFSAA spring championships have been cancelled for 2020 due to the COVID-19 pandemic.